Urinary incontinence is a general term that refers to uncontrollable, or involuntary, leakage of urine.

The urinary bladder is normally controlled by the brain, which send signals via the spinal cord and peripheral nerves, to the bladder muscle, and the muscles which control the bladder outlet. However, if there is an injury or malfunction in any of these structures, urinary incontinence may develop. 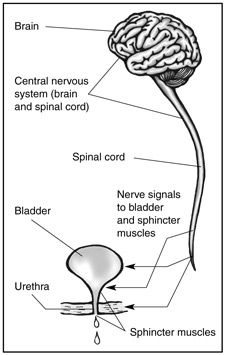 There are several different forms of urinary incontinence:

This is the most common form of urinary incontinence and is caused by the muscles at the bladder outlet being weak or not contracting properly. The most common cause of SUI is pregnancy, which stretches the pelvic floor muscles. It is called stress incontinence because any physical activity causing pressure on the bladder causes the leakage. This can happen with exercising, lifting, or even just sneezing and coughing. SUI can vary from leaking a few drops occasionally to much heavier daily leakage. A small percentage of men may develop permanent SUI as a side-effect of prostate cancer treatment, and Dr Patel can perform surgery to treat the leakage.

As yet, there is no medication for SUI, so the main initial treatment is pelvic floor exercises or “Kegel” exercises to strengthen the pelvic floor. It is important to do these exercises daily, for at least 3-4 months to maximise the chance of improvement.

Usually, the bladder will only contract forcefully to push urine out when your brain tells it to. However, in this condition the bladder muscle contracts unexpectedly, usually when there isn’t even much urine in the bladder. People with this form of incontinence typically describe a strong urge to pass urine followed by uncontrolled leakage before they can get tot the toilet. Urge incontinence is a common symptom in patients with OAB (attach link)

Some people experience both leakage with activity (SUI) and also have  strong feelings of  urgency with leakage. This is called mixed incontinence, and management should be aimed at treating the stress incontinence, as this often makes the urge incontinence to improve.

Overflow incontinence is a more uncommon form of urinary leakage. It usually occurs in men who have severe prostate blockage or in people whose bladders have lost the ability to contract properly. Urine therefore accumulates in the bladder until it reaches maximum capacity and the urine literally leaks out.

This is a very minor form of incontinence that occurs in men after they have passed urine. It is caused by a small amount of residual urine (a few mls) that is left sitting in a man’s urethra after passing urine. Typically men complain of leaking a small amout of urine on their underpants as they walk away from the toilet. This form of incontinence occurs in men of all ages and does not mean they have a prostate problem. It is easily prevented by making sure you take enough time to empty your bladder properly and also by pressing forwards on the urethra where it passes through the perineum, the area between the legs, behind the scrotum and in front of the anus.