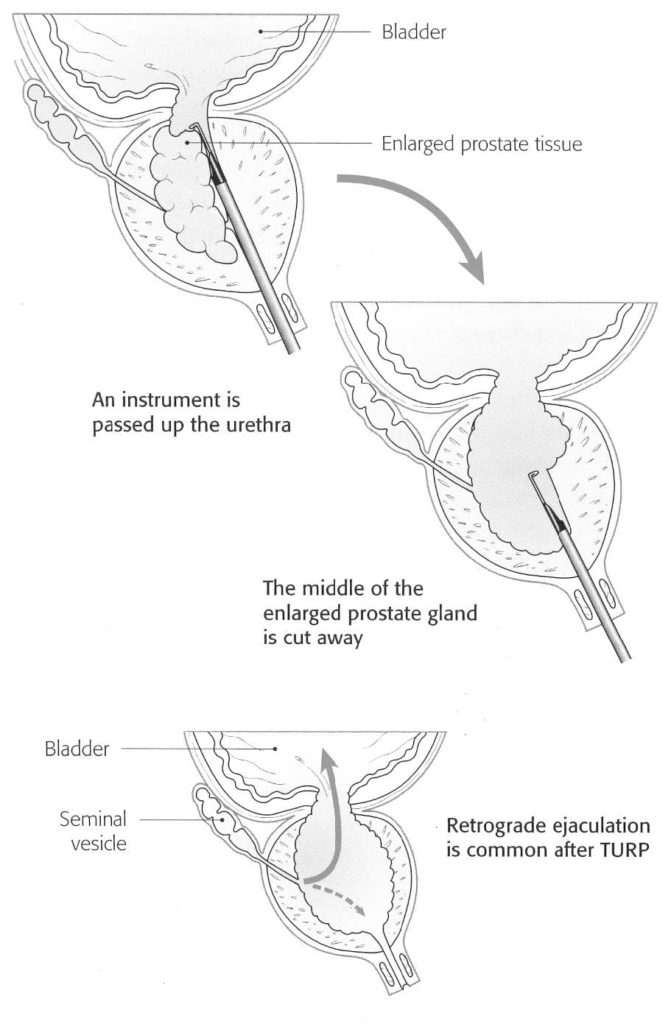 TURP and/or BNI are performed to relieve blockage to the bladder outlet from benign (non-cancerous) enlargement of the prostate gland. A thin scope called a resectoscope is passed through the urethra into the prostate and an electrical loop is used to shave away the central part of the prostate that is causing blockage. The operation usually provides significant and permanent improvement in urinary symptoms.

It is usually performed under general anaesthetic, and requires 2-4 nights in hospital. A catheter (drainage tube) is left in the penis for 2-4 days after the operation.

The only expected side-effect is “retrograde ejaculation” (orgasm without ejaculation of semen) which occurs in 80-90% of men and is permanent. It is not dangerous in any way. Otherwise, erections and sexual desire (libido) should remain the same.

Rarely, some men may report weaker erections after surgery but these are usually men who had poor erections prior to their operation.

Some bleeding can occur during or after the operation but blood transfusion is needed in less than 1% of patients.

Permanent urinary incontinence is rare (less than 1 in 400 cases) but it is normal for men to get a small amount of leakage in the first month or two after surgery as the prostate is still healing.

Urethral stricture or narrowing of the urethra is an occasional complication (less than 2% cases) but can always be treated.

Blood clots may form in the legs or lungs during surgery. This can be a potentially life-threatening condition but precautions are taken to minimize this risk (less than 1 in 300 men).

Urgency, bleeding, burning with urination (dysuria), and frequency of urination can occur for 4-8 weeks after the operation, as it takes time for the prostate to fully heal up fully.

Strenuous activity and straining should be avoided for 3-4 weeks after the operation to decrease the risk of bleeding.