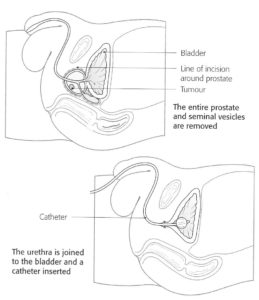 RALRP is surgery performed to treat localised prostate cancer. It is performed under general anaesthetic and takes about 3 hours. Six small cuts are made in the abdomen, and a camera scope, as well as laparoscopic instruments, are placed through these port sites. These instruments are then attached to robotic arms on a device called a daVinci robot, and the surgeon then controls these robotic arms from a separate console. This way of removing the prostate gland is becoming more and more popular because the robotic arms provide a greater degree of steadiness and dexterity for the surgeon, as well as an enhanced and magnified view of the prostate gland and surrounding structures. This can allow a more precise operation. However, it is important to emphasise that this is still major surgery with potential risks and side-effects and that it is still the surgeon, Dr Patel, who performs your operation.

The overall cure rate for men undergoing this operation is high, around 85-95%.

The entire prostate gland and seminal vesicles are removed in the operation. Sometimes, regional lymph nodes are also removed as part of the surgery. The bladder is then reattached (anastomosed) to the urethra so that urine is still passed through the penis postoperatively. However, semen is no longer produced and you will be sterile.

Most patients can go home after 1-3 days, but a urethral catheter (see diagram over) is left in place for about 7 days after the operation to allow the anastomosis to heal up properly.

Incontinence (involuntary urine leakage) can occur after surgery also, but the vast majority of men will gain good urine control within the first 6 months after surgery, especially if they perform male pelvic floor exercises daily after the catheter is removed. Dr Patel’s office will provide you with a brochure on pelvic floor exercises. The risk of permanent and significant leakage beyond 12 months after surgery is only around 2-3%, and if it does occur, it can often be permanently improved by a small operation called “transobturator sling placement”.

DVT and pulmonary embolism (blood clots in the legs or lungs) can occur after any surgery and are potentially life-threatening. The risk is low (less than 2%) and appropriate precautions will be taken to minimize your risk.

Rarely, the rectum, or back passage can be damaged during surgery (less than 1%). This may require further surgery to repair any injury.

After surgery, the prostate is examined by a pathologist to see if all the cancer is contained in the specimen. If so, then no further treatment should be required.

You will need to avoid any very strenuous activity or heavy lifting for 6 weeks after your operation.

THIS INFORMATION COVERS THE MAIN ISSUES RELATED TO ROBOT-ASSISTED RADICAL PROSTATECTOMY AND SHOULD BE SEEN AS AN AID TO YOUR DISCUSSIONS WITH DR PATEL REGARDING YOUR TREATMENT.